USD is getting more and more popular in recent production across DCC and look dev software. Miarmy 7.5 supports procedural skeletal mesh and instancing USD exporter which is able to export USD files directly from agents fast. Then you can import the USD to Clarisse iFX, Katana, Houdini Solaris or UE4 etc to render it without setup other render procedurals. 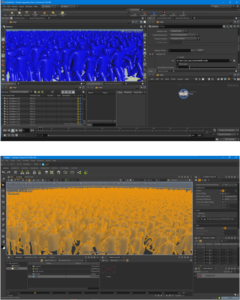 In the new version, we added a set of new tools which allow us to automatically transfer the XGen and Yeti fur onto the agent geometries and procedurally render fur on each agents.

We introduced a new tool which can bake the geometries deformation data along with each action from the animated rig and apply the deformation to each agent for different actions in render time.

Now we can fast export the simulation result into the Unreal Engine.

The geometries which assigned facial shaders are supported in Arnold Render now and this allows us to render combined geometries with multiple shaders.

Now we can automatically render most parts of agents as clone to accelerate the render speed.

The cloth has been refactoried and now the simulation has been optimized especially the reset speed with large scene. Now we can feel more comfortable to simulate thousands of clothes in large scene.